Informotron
Way With Worlds: Book One 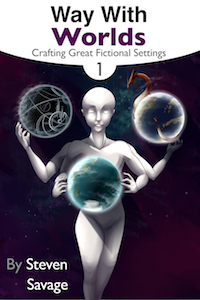 "I wrote the first Way With Worlds columns in the late 90's, to explore and advise on worldbuilding for the growing online communities of writers and gamers. Nearly one and a half decades later, I decided to revisit and rewrite them, publishing them at Seventh Sanctum and other sites. Now, polished, edited, and expanded they're available in handy book form for dedicated creators!"

Creating fictional worlds is fun - but making memorable, effective ones is often challenging. How do you make something that doesn't exist, make it real enough people enjoy it, and make sure it endures, grows, and keeps making sense to your expanding audience?

Way With Worlds offers you a helpful guide to being a better worldbuilder. From basic theories and principles to guide you, to intense discussions of sex, ecology, and culture, you'll take a tour of the best ways to make places that never were. When you're done, you'll have a grasp of worldbuilding that will make sure your fiction is as memorable as fact.

In this book you'll explore:

Be sure to check out the sequel Way With Worlds Book!