Informotron
A School of Many Futures: A Story Of Questionable Decisions And Mystic Destinies 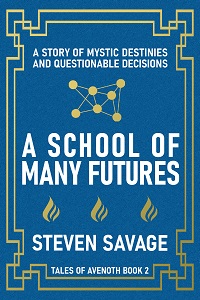 Marigold the sorceress and Scintilla the technic were typical teachers of Techno-Mystical Safety. It took people with an edge to teach about mad deities, deadly tech, and wild magic. Unfortunately, their edge came from secrets: dead god and government coverup kind of secrets. That meant people started asking questions no one wanted answered.

Teaming up with their fellow conspirators, Reverend Beacon and Briar the soldier, they took an assignment at recently-founded Magoneer Academy. A typical new school was all they needed to escape scrutiny about their past.

Unfortunately, their secrets might be the least dangerous ones there. How could a school barely a year old attract impossible mysteries, strange destinies, an assassin, and worse? It would take people with an exceptional edge to protect the students and find the truth . . .

Kindle ($6.99)
Buy
Print ($16.99)
Buy
Other ($6.99)
Buy
Informotron (tm) and its contents are copyright (c) 2017 by Steven Savage except where otherwise noted. No guarantees whatsoever are made regarding the contents of the site.